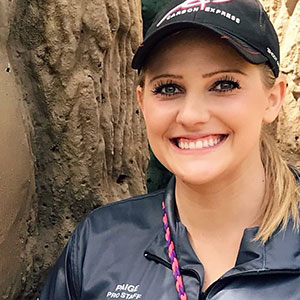 My name is Paige Pearce. I am 22 years old and a World Champion professional archer. I have grown up competing in archery tournaments and hunting. Archery is not just a hobby, but my passion and my way of life. I began shooting a bow and competing in archery tournaments with my family at age 2. I obtained my Hunters Education Certificate at age 8 and began hunting game birds with both a shotgun and a bow. When I turned twelve, I began hunting big game with a rifle and a bow. Since then, I have harvested many deer, bear, pigs and elk in the State of California, Colorado and Idaho.

At age 15, I became a Professional Archer. I happened to win my first pro tournament that year, and have been competing at the highest level ever since. I compete in several different types of archery tournaments including, indoor, 3-D marked and unmarked yardage, Fita, and Field. I travel all over the United States and the World. I broke my first state record at age 10. I have broken and/or currently hold over 115 State, National, Star Fita and World Records. I made my first United States World team at age thirteen and I have been on the US Team ever since. I am currently the number one ranked female in the United States, and have won countless gold medals at National Championships, World Cups and World Championship events. The past four years, I have been the NFAA Professional Shooter of the year.

During the 2017 tournament season, I was able to continue as one of the most dominate forces in the industry by placing 2nd at the Iowa Pro/Am, 3rd at the Lancaster Archery Classic and So Cal Showdown, and I was able to finish 1st at the OPA, the Big Sky Open, the NFAA 3D Nationals, the NFAA Outdoor Target Nationals, the NFAA Field Nationals, the NAA (US Archery) Gator Cup and the Outdoor Target Nationals. At the 4th Outdoor World Cup in Germany, my team won the gold and I also won the mixed-team gold along with the top scoring male for the U.S. I secured the number one position on the United States World Championship team and competed in Mexico. I also secured the number one position on the Indoor World Championship team for 2018. I finished the year shooting the indoor World Cups where I finished 2nd at the first stage of the Indoor World Cup in Marrakesh, Morocco and I won the second stage of the Indoor World Cup in Bangkok, Thailand.

One of my main goals in the industry, whether I am on the tournament trail or in the woods, has always been to get the next generation involved in the outdoors. I have worked with youth doing training clinics for archery, private lessons, birthday parties, classes and much more. I have worked with the National Field Archery Association (NFAA) at their high level performance compound academies for both youth and adults. I currently run a summer program called the Kids Outdoor Sports Camp (KOSC), a non-profit organization where children receive their Hunters Education Certificate, participate in many shooting sports and learn the importance of conservation.